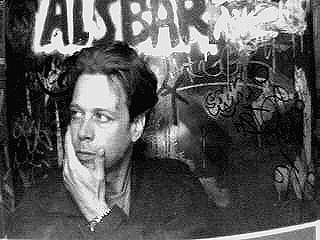 Dedicated to the open source community.

Bob Powell Anthology is a collection of recordings by Bob Powell spanning over a 25 year period. Beginning in 1975 with "Mississippi Mud" and ending in 2001 with "A Day at the Races with I Claudius Rip Off Number One". Part 1 mastered by Tom Grimley 2001, Parts 2-5 mastered by Bob Powell in the years 1999-2002. There is no actual chronological order to the songs. They are merely arranged to paint a landscape of musical folklore.

"Bob is a wandering minstrel, and as our greedy time has harvested every attention, he's sneaking into neighboring backyards while we're sleeping, luring lucid dreamers to pasture. It may be years before he hops your fence, and longer still will his tales of irreversible loveliness shake your sealed windows and charm your fluffy warm blankets before you repent...but you must! This music will slip in and out of your indecision, ring true when the bells are tolling, and rest on your weary back as wings whilst you run with hastened resignation for the hills...and like a wandering minstrel, gone far too soon." Tom Grimley

"Bob Powell's Anthology may be one of the very best or very worst offerings in the Internet..." All About Jazz

"Bob’s music is weird and wonderful. Bite off a chunk at a time, though, as the sheer volume in the anthology can leave your head spinning." Unlikely Stories

"Bob Powell is one tripped-out guy. How do we know? All those echoes bouncing around and colliding in his songs, the non-sensical underwater lyrics, the feeling that his music sounds exactly like the moment when things start melting before your eyes when the trip really takes off. You could bury these tapes in a field and watch the mushrooms grow." - Kali H.

Back cover photo taken in the photo booth at Al's Bar.

Dont Fear What You Cant See co-written with Kathy Everson.

Back cover photo by Tamara Friedman.

Part Five: Dreamscape of the Falcon

Presented by Igloo the Theatrical Group and the Off-Off Loop Theatre Festival in Chicago 1987.

Hidden beneath the risers the soundtrack was played live by Bob Powell during performances.

News Flash from Chicago Tribune circa 1987.

First, I have to thank you Bob for what you've done. Really impressive music, i had a great trip into your mind and when I came out of this hell, I feel great. My mp3 player as been violated by your music.
It really helps others free artists who made share-arts to feel something good is happening in the free art! This is real music for indepedant mind and open-wide people.

P.S. Excuse me for the bad english, i'm french hehe.

PS: For those who don't like this music, "Dont fear what you can't see" (or understand, because you are too mind-oriented)
Reviewer: AdDM - favoritefavoritefavoritefavoritefavorite - January 26, 2005
Subject: Hi-quality krap
ok, sound-quality is krap, vocals are pretty krappy most times, its not particulary good, or even very interesting musically, werent it for the fact that in a weird way it IS really good. Some superb gems in there that grow on you quite rapidly, like sterling silver, everybody thinks im crazy, babywinged butterfly. The sheer amount of tracks make it impossible to digest as a whole, but its fun just browsing thru the anthology. Hi-quality krap, just the way i like it!
Reviewer: Chris Barry - favorite - November 19, 2004
Subject: Worthless Crap
That anyone would actually record this crap and expect others to listen to it seems absurd to me. To then quote Burroughs in his defense shows that this guy thinks an awful lot of himself. I swear, the next thing released will be a recording of him snoring, with a brilliantly constructed collage of garbage disposal, doorbell and dentist drill. The sychophants who rave about this crap would sit and listen to an hour of it and proclaim it to be a masterpiece. Why anyone would waste a moment of thier time with this is a mystery to me. I think they must feel that it makes them oh so cutting-edge and artsy. If I could give this thing negative stars, I would, but unfortunately, 1 is the lowest allowed.
Reviewer: bt - favoritefavoritefavoritefavorite - October 25, 2004
Subject: It's all over the place, but beautiful
Some surprisingly fine songwriting and pretty wild arrangements for a lo-fi hom recording setup. This is an unbelievably huge project, so I'd recommend biting off a little piece at a time to see if you like the taste.

Unlike my fellow reviewer, this is why I treasure the Archive.
Reviewer: bob_powell - favoritefavoritefavoritefavoritefavorite - August 23, 2004
Subject: re: richard.ca critique
When speaking of many critics' responses to his writing, Burroughs said, "'Nihilism, unrelieved despair and negation, misanthropy, pessimism'-very much the same set of cliches that greeted Louis Ferdinand Celine's Journey to the End of the Night..."
(These five stars are dedicated to richard.ca)
Reviewer: richard.ca - favorite - August 21, 2004
Subject: bob powell anthology
Another piece of junk.
why do you let stuff like this go into your
archives.
50 years from now somebody will think we were nuts.
Star rating should be -10